Jack and Jill Live on a Hill – Part 2

Remember the Ebonised, 1898 Ibach ¾ grand piano that Jack and Jill entrusted to us to bring to its former glory?

Well, we have made a lot of progress on this delicate and highly specialised restoration project and during this process we’ve unearthed several “sins”, hiding beneath layers of polish, that previous restorers had committed on this beloved family heirloom. 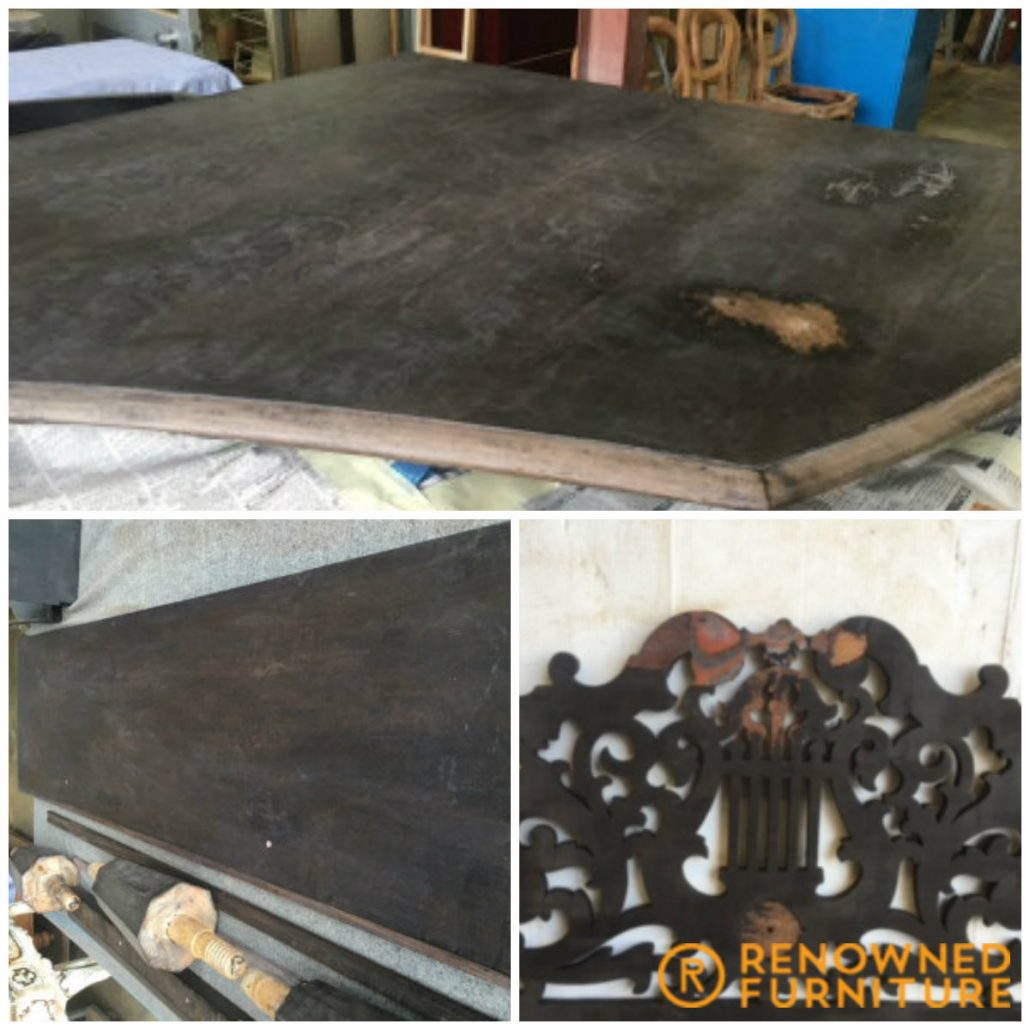 Top Photo: We’re loving the history ‘tell tales’. Jack mentioned that his grandmother used to have a pot plant on the piano: Here is the spot where the pot plant lived, hidden under the dark layers with a filler compound.
Bottom Left Photo: Some of the holes created by the previous restorer! Also, the amazing ‘fiddle back’ grain character that has been hidden for some time due to the use of fillers and dark stains applied to hide past damage.
Bottom Right Photo: The filigree timber music stand, damaged due to a movement in the joints where the filigree has been replaced/repaired. We’ll be re-veneering this piece back to original.

Here are some more progress shots

Upper Left Photo: “feathering” the cracks in the leg turnings. We insert new slices of timber thinly cut to strengthen the legs with real timber and glue, rather than just fill the gaps with bog or just glue.
Upper Right Photo: Under the lid where we have hand carved a new lip to replace the plaster bog that some previous armatures had used in a poor attempt to repair it.
Bottom Left Photo: The base timber and the cool grain pattern.
Bottom Right Photo: The solid timber turnings that form the decorative parts of the legs. Now fully stripped back to reveal the natural timber grain.

It’s interesting to note that there are more than 5 different species of timber in the piano and no one piece is the same as any other. For example, all the leg turnings have differing hole diameters and differing external radiuses meaning that the piano can only go back together one way: The original way. We were thinking that the tolerance differences were incidental due to the handmade nature of the piano but who really knows.

Jack & Jill’s grand piano is making progress. We’re going to re-veneer the lid where previous so-called trades people have “had a go” at it and bring the whole piano back to its original condition. Can’t wait to see the results…